Allistair Burt Interviewed in Folksy - Hole in My Pocket 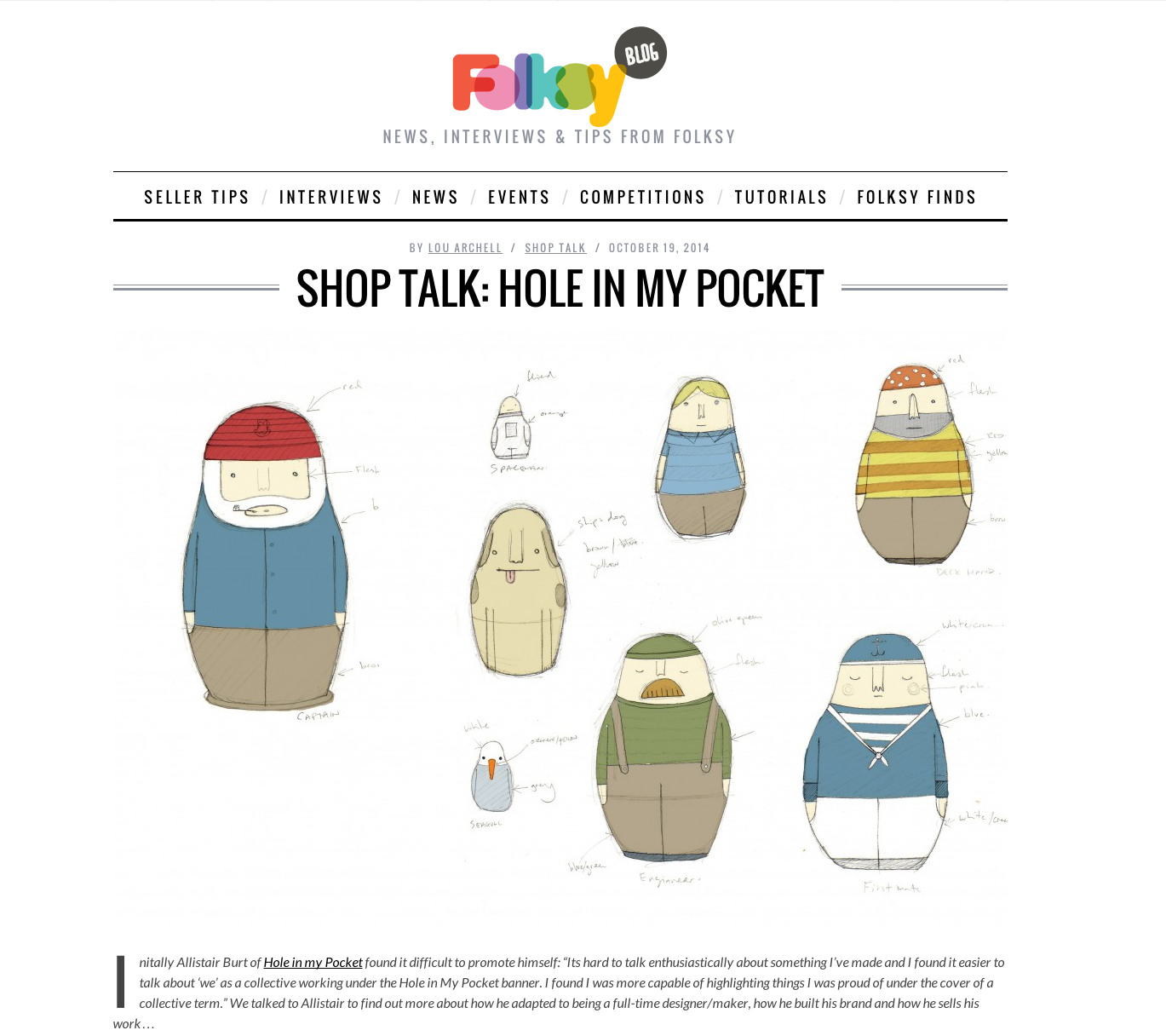 Can you tell us a bit about yourself and your work?

Hole in my Pocket was first established when I graduated as an architect and I started my first year out in practice. I quickly discovered that the job of the architect was not the wonder of creativity that university had led us to believe and that the majority of the time, the work actually involves managing people. It’s also quite a slow process. Some buildings, currently passing through our office have been in development for six to eight years! It’s why I like to have a mix of work now.

Slightly down heartened by the initial months in my first office, a fellow graduate and myself decided we needed some kind of outlet for our creativity. We decided to start entering design competitions and I’m pleased to say we won the first couple of things we entered. The money from the prizes funded our first few projects and exhibitions and I’ve been working under the title of Hole in my Pocket ever since. I basically keep an eye out for anything that might require a creative solution and if I can see a way to solve it or if I come up with a fun idea, then I go for it. This can sometimes mean I take on too many projects at once.As a result I have quite a varied back catalogue of projects including; architecture, illustration work for publishers, directing short films for Channel 4 and the Glasgow Film Festival, creating the Small World Experiment, designing a Storytelling Machine, hand painting 100 t-shirts for a swanky London party, forming my own religion ‘Himptology’ and trying to sort out the MPs’ expense fiasco through creative means in a project entitled ‘Common of Houses’. Throughout this time I’ve also created more traditional art work for galleries. Also a couple of years ago I started designing products like cards, mugs and thirsts, which I sell in design shops around the UK.

Did you always want to be an artist?

I would say yes as the other idea when I was five was a mad scientist and there’s an even less fluent career path to that than becoming an artist. I’ve always made things, be they pop-up books for my little sister when we were tiny, stop motion animation with the family video camera or organising treasure hunts involving some kind of performance. I wasn’t entirely sure what exactly I would become, but I knew it had to involve making things.

Does your background in architecture help or influence your making?

I’m often asked how balance being an architect by day and working on the varied Hole in my Pocket projects in the evening. The truth is I now split my time between them, plus I’m an insomniac so I get a few more hours in a day than most people. I studied Architecture at Strathclyde University which at the time had a pretty flexible and open study practice, allowing scope to explore various artistic projects and produce a range of works exploring different themes. There was an elective class there which I took in the third and fourth year called “Experimental Aesthetics”, which really pushed you to try out strong conceptual ideas and it was through this class that the concepts behind our first competition wins was born. We were encouraged to tackle projects from interesting avenues. For example, as research for my thesis project I took an air-hostess trolley full of wine on a voyage around Scotland. As I travelled I gathered stories from the people I met and on my return home I designed folly buildings that retold the tales I’d encountered through architectural form. My training as an Architect has also meant I’m very methodical in my work – I’m used to running large teams of people, managing contractors and controlling large budgets to get projects to competition.

How did you find your style?

I think my style(s) has developed naturally, I still draw certain things the way that I always have, from my early days as a wee boy. I do work in a lot of different mediums and within each I have used quite starkly different styles but I think there is an ethos or humour behind all the different pieces which runs as a constant strand and allows people to identify that a piece of work is by me. I think, my work tends to be humorous, with a certain degree of honesty and the main purpose of everything I do it to make people smile and the world a little more interesting. A journalist once described my work as “making delighted children out of the most serious of grown-ups” and I hope to always work towards that.

Are there any artists or designers who particularly inspire you?

Depends on what hat I’ve got on. With architecture projects I really like the thinking on place making that William H Whyte talks about; with the film pieces I’m a big fan of the way Wes Anderson frames everything; and with illustration/ graphics I admire the work of people like Sempe, Charley Harperand Charles Addams. For a mix of the whole lot I’d say probably the writing of Georges Perec or the ideas, thinking and madness of artist/ architect Hundertwasser.

What else influences your work?

I’ve always been a huge reader and the books I’ve read have always had a big influence on me. My wife (artist/ architect Ann Nisbet) and I have a rather ridiculous amount of books between us. They come pouring out of our giant bookcase at home and form several towers at the studio, we will soon have enough to open our own library. As a result, my favourite tale is constantly changing but recently I’ve been rereading Georges Perec’s Life a User’s Manual which is a fascinating multi-layered meander through the delicacies and complications of everyday life. It’s a book you can re-dip into for a chapter and find a new way of thinking about something you’ve always taken for granted in the past. I’m also a huge collector of illustrated picture books. When I was a wee, I loved the Ladybird series that my parents would buy for me. My favourite tales were the one about the magic paintbrush (everything you draw with it becomes real) and the one about a series of connected events that allow an old woman to get her pig to jump over a stile.

Where do you work? Can you describe your studio?

My current studio is two rooms in a building overlooking a large park in the Southside of Glasgow. One room is for digital and clean paper work, the other is the rather more messy space where painting and other splattering things take place. The building was built in 1905 and as an oddity at the time, it was built with a roof garden for drying your clothes and growing flowers and vegetables. We are the tallest building in the area and so on one side we overlook the entire west of the city looking out to Loch Lomond and on the other we overlook over the tree tops to the heart of the park. The roof garden is my favourite space in the city. It doesn’t matter how busy things are, you can escape up there to sit on a bench and watch the leaves blowing in the trees and everything just relaxes.

What are your three favourite tools?

I have an old technical pen that I bought when I started uni that I’ve used ever since. It’s a 0.25 nib that constantly blocks or leaks and I spend quite a lot of time with ink on my mouth from trying to clean it out, but it gives me a great line weight. The second best tool is again from the first collection of items that I bought when starting uni, a bright blue clutch pencil and sharpener. My third favourite tools are my sketchbooks. I started keeping A6 sketchbooks when I first started studying architecture and over the years I’ve managed to fill around 50 of the things with all kinds of illustrations, notes of trips, birthday lists, initial thoughts on projects and unfinished ideas. When I’m struggling to solve a problem I’ll often flick back through them and find I’d come up with the perfect solution for a completely different project years ago. I don’t often go anywhere without pen pencil and sketchbook.

Finally, is there a piece of work you’re particularly proud of?

Product wise I’m usually most proud of whatever I’ve just been working on. So the latest card range is my favourite or the newest set of dolls that I’ve painted. I invest a lot of time and heart into the characters and into creating worlds/ stories about them so they feel very close to me. One of my favourite main art projects recently was a commission to design an exhibition and series of performances for the Glasgow International Biennal. Taking direction from the GI’s programme ‘Real Time’ I tried to explore the experience of time from a macro/micro view point. Trying to understand the concept of ‘the moment’/ ‘the present’ when viewed against the enormous background of the history of the Universe. The show was well received, despite competing against a lot of bigger names and shows, and I’ve been approached about developing the work for showing in other venues abroad.